Bhopal, Jan 7 (PTI) Several parts of Madhya Pradesh, including its capital Bhopal, experienced unseasonal rains with thunderstorms accompanied with lightning and hail forecast in the western region of the state on Friday.

The Nagpur-based Regional Meteorological Centre has issued an ‘orange alert’ warning of thunderstorms with lightning and hail in western Madhya Pradesh.

Parts of the state received showers since Thursday.

“Such weather is likely to prevail over large parts of the state for the next two days as an induced cyclonic circulation was lying over southeast Rajasthan on the MP border, GK Mishra”, a senior meteorologist with the India Meteorological Department’s (IMD) Bhopal office, said.

“The induced cyclonic circulation is bringing in moisture causing rain in parts of Madhya Pradesh, he added.

Besides, he said another western disturbance has set in in India.

Already reeling under a cold spell, people in large parts of the state woke up to the sound of raindrops and wet outdoors.

The orange alert warned of thunderstorms accompanied with lightning and hail “very likely at isolated places” in western Madhya Pradesh.

Intermittent rainfall in Bhopal started at around 2 am.

Khajuraho, a tourist town in Chhatarpur district, received 40 mm rainfall in the last 24 hours ended at 8.30 am on Friday, the weather office said. 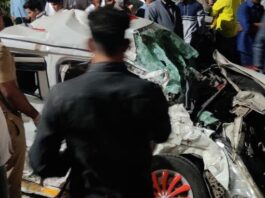 Maharashtra: Over 40 vehicles damaged in a road accident at Pune-Bengaluru...